Six days after her resignation because of major security breaches and contravention of the ministerial code, Suella Braverman has been reappointed as home office minister by the new PM, Rishi Sunak.

Labour and the Liberal Democrats have called for a cabinet enquiry into Braverman’s use of private email to circulate government papers before the relevant immigration policies had been agreed. While Jeremy Hunt and Liz Truss favoured increased migration to boost the economy, Braverman has advocated keeping net migration to ‘tens of thousands’.

Political analysts suggest that Sunak has chosen Braverman to ensure the support of the influential European Research Group and the Common Sense Group, right-wing factions within the Conservative party.

But Rishi Sunak is known to share her harsh views on refugees and asylum seekers. During his recent failed leadership campaign, he announced plans for an annual cap on refugees granted asylum, and said he fully supported the Rwanda scheme.

In a Channel 4 interview with on July 29th, Sunak also hinted at changes to human rights legislation : ‘We clearly have a problem with human rights law in this country, which is making it difficult for us to achieve our objectives,’ he told the interviewer, Andrew Neil.

During an event at the Conservative party conference in early October, Braverman  said that  the UK should leave the European Convention on Human Rights. In her main conference speech, she also insisted that migrants crossing the channel would face a ban from claiming asylum in Britain.

Meanwhile, Suella Braverman has launched an enquiry into a  company owned by a lawyer involved in halting a deportation flight to Rwanda, according to a Daily Telegraph report. A Home Office source told the newspaper that Braverman had ordered an ‘urgent review’ of a  training company jointly owned by Mark Symes, a barrister at Garden Court Chambers, one of the barristers who secured an injunction halting a flight to Rwanda in June. The company, HJT Training, which trains immigration advisers, has denied any conflict of interest and it is not accused of any wrongdoing.

The government quango responsible for overseeing immigration, the Office for the Immigration Services Commissioner, OISC, has said that it is satisfied that the company meets ‘the required standards’ and it also rules out any conflict of interest.

Garden Court Chambers said the asylum seekers they were representing all had strong cases, and their stories showed ‘the inhumanity in the Rwanda policy’. 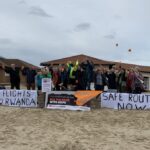