Ministers have admitted that they have no idea where 222 vulnerable, unaccompanied refugee children have gone, after they disappeared from Home Office-approved hotel accommodation.

Seventeen vanished within a day of being placed in a hotel.

Carolyne Willow, the director of Article 39, a charity campaigning for the rights of children in state institutions, has said that the government’s failure to protect children had arisen out of the Home Office’s decision to house children alone in hotels, instead of ensuring that social services took responsibility. An independent inspection has also criticised the Home Office, revealing that two hotels had staff who had not received DBS checks. 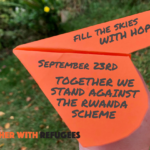