A Daily Telegraph investigation has found that refugees caught up in Libya’s civil war and subsequently ‘resettled ‘ in Rwanda have been living in a transit camp for up to four years. Most are unemployed and food is poor. They rely on £35 a month handouts, inadequate to buy shoes and other necessities.

The refugees feel “isolated in a turgid limbo at the bottom of Rwandan society, unable to speak the immensely complex local language Kinyarwanda,” according to the report.

It says that Rwandan police have used violence to control refugee protests, killing at least eight people in 2018 when dispersing refugees protesting over UN food cuts.

“’Imagine fleeing your country due to war only to be killed in the host country that should be protecting you,’” one refugee told the Telegraph. 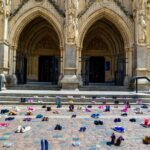